Palermo, Trapani, Agrigento, Piazza Armerina, Ragusa, Noto, Marzamemi, Siracusa, Taormina. A 7 days itinerary in Sicily will bring you from the West to the East coast of this beautiful island, touching upon selected highlights along the Southern coastline.

Carefully tailored to let you enjoy the best bits of the Mediterranean’s biggest island on a tight schedule, this 7 days itinerary in Sicily will bring you from the West to the East coast of this beautiful island, touching upon selected highlights along the Southern coastline. 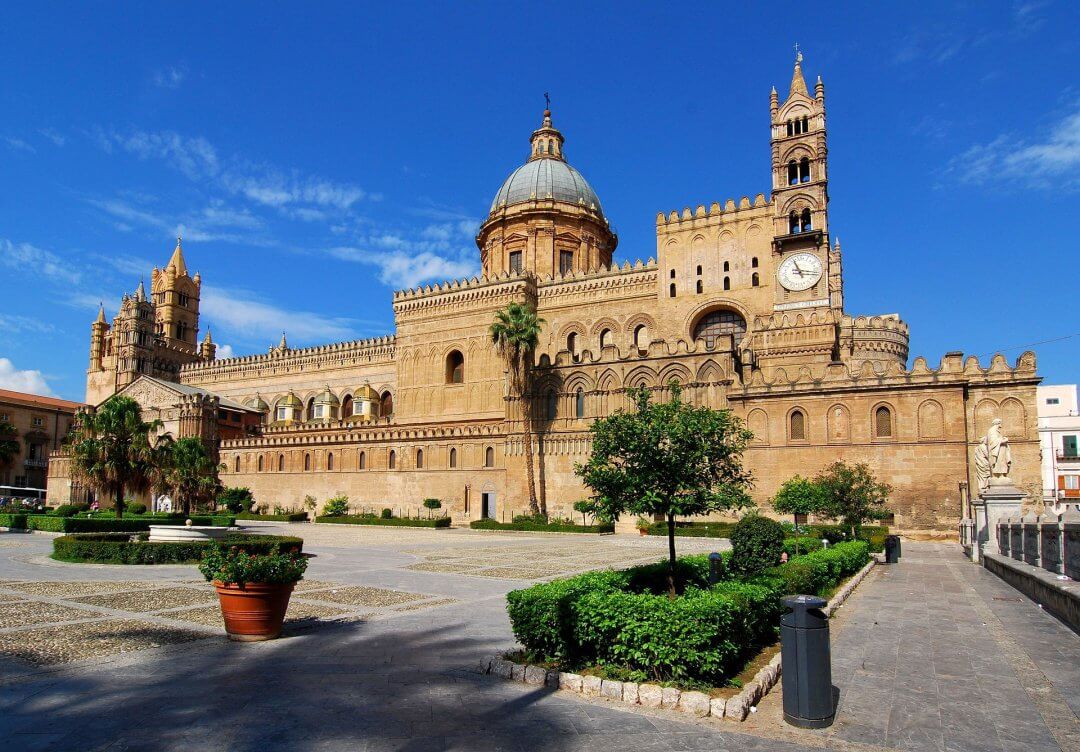 Day One of the journey brings you to Palermo, where a walking tour is ideal to fully appreciate the unique Norman-Arab-Byzantine architecture, a rare multicultural experiment which embellishes the city’s streets and numerous alleys.
Piazza Politeama, Palermo’s main square; Via Ruggero VII, commonly referred to as ‘salotto di Palermo’ (Italian: ‘Cultural Salon of Palermo’); the Teatro Massimo, the biggest opera house in Italy; Via Maqueda, a historic commercial strip; Quattro Canti, a Baroque square splitting the city’s old historic district into four sectors; the spectacular Palermo Cathedral; the Royal Palace of Palermo (also Palace of the Normans) with its Cappella Palatina (Italian: Palatine Chapel); Mercato del Capo, a famous market: these are only a few sights you will get the chance to admire and explore while in Palermo. 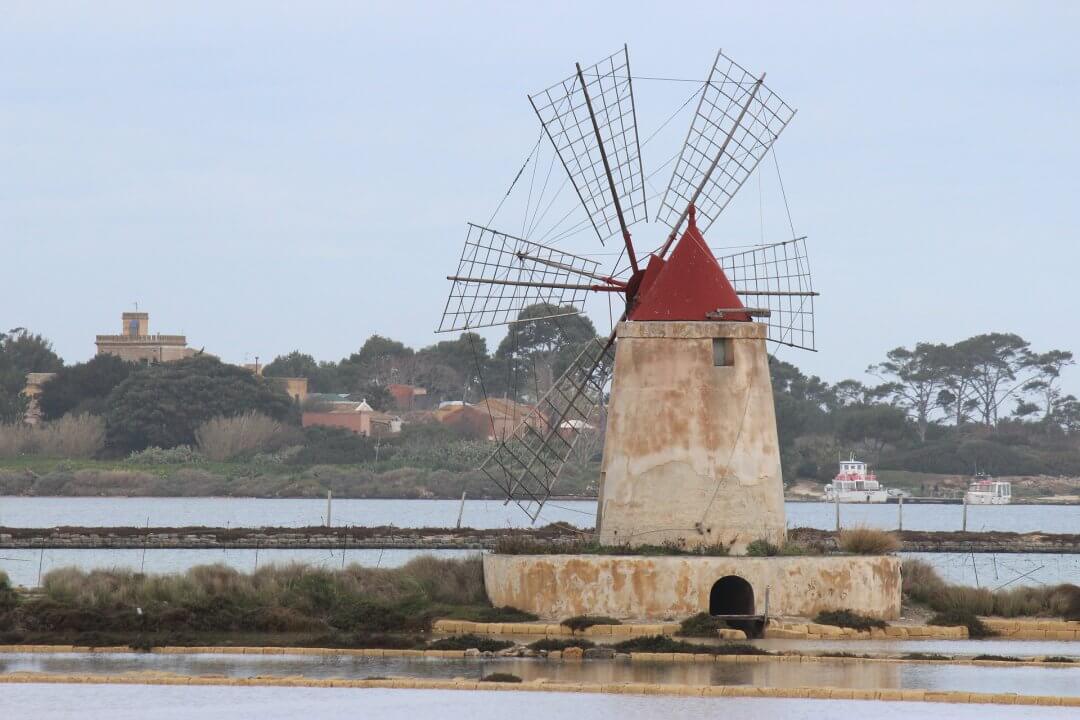 Trapani offers a wide range of attractions: the city centre featuring historic buildings, the renowned fish market where you can bask in mesmerising views on the Mediterranean, the ancient salt works and windmills, a sight to experience at least once in your lifetime.

Day Three: Valley of the Temples and ‘Scala dei Turchi’ (Italian: ‘Stair of the Turks’) 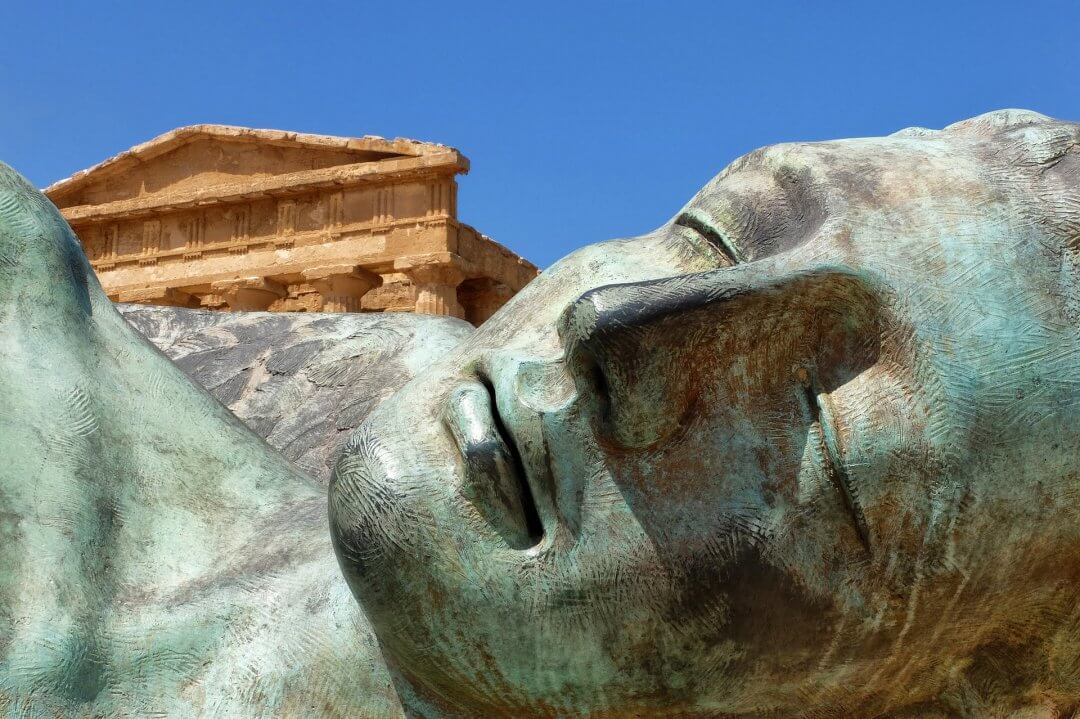 It’s time to leave Trapani and head south to visit Realmonte in the province of Agrigento, where you can visit the Roman Villa located in Punta Grande. From here, our journey takes you to the
‘Scala dei Turchi’ – alluring snow-white views and a soft limestone staircase overlooking the intensely blue water will be a feast for the eyes.
In the most powerful city of the em>Magna Graecia (Agrigento) is the Valley of the Temples, an archaeological site included in the UNESCO World Heritage Site list. These are the remains of the ancient Akragas, once constituting the original centre of Agrigento. Settled along a rocky edge are majestic Doric temples dating back to 580 BC, originally dedicated to Hellenic deities. 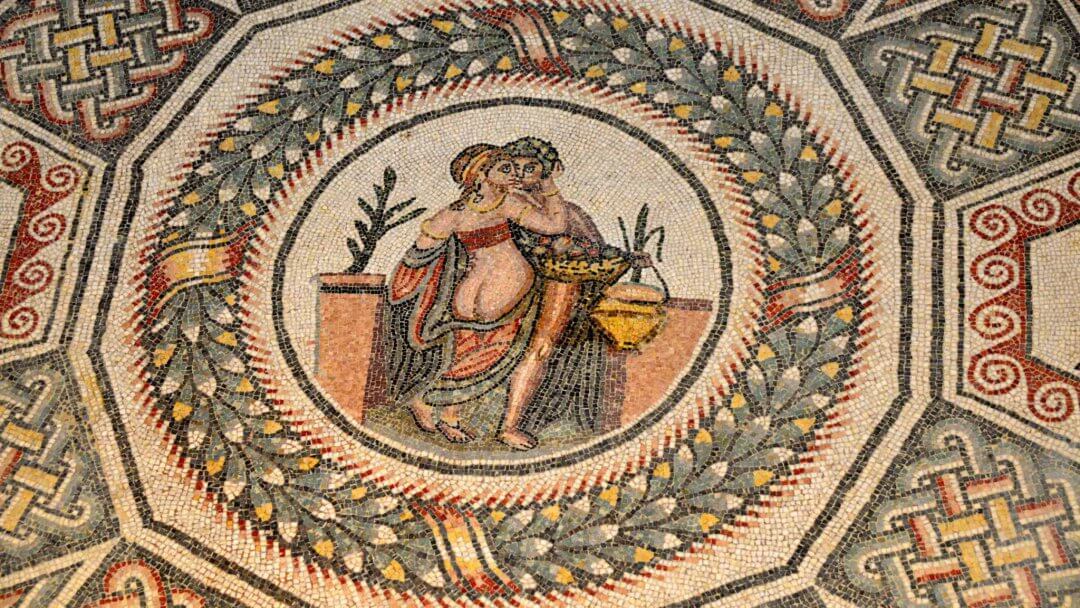 During the day we will reach the very heart of Sicily in order to lose ourselves into the colours of the Roman mosaics of the Villa del Casale, which is situated only few kilometers away from Piazza Armerina. Dating back to the fourth century, the villa’s mosaics represent scenes of Romans’ daily life and they are incredibly charming with their beautiful, vivid colors that remained almost unchanged over the centuries.
We will then move over to Ragusa Ibla, where we will visit Piazza Duomo, the Hyblaean gardens, St. George's portal, St. Joseph's Church and Piazza Pola. 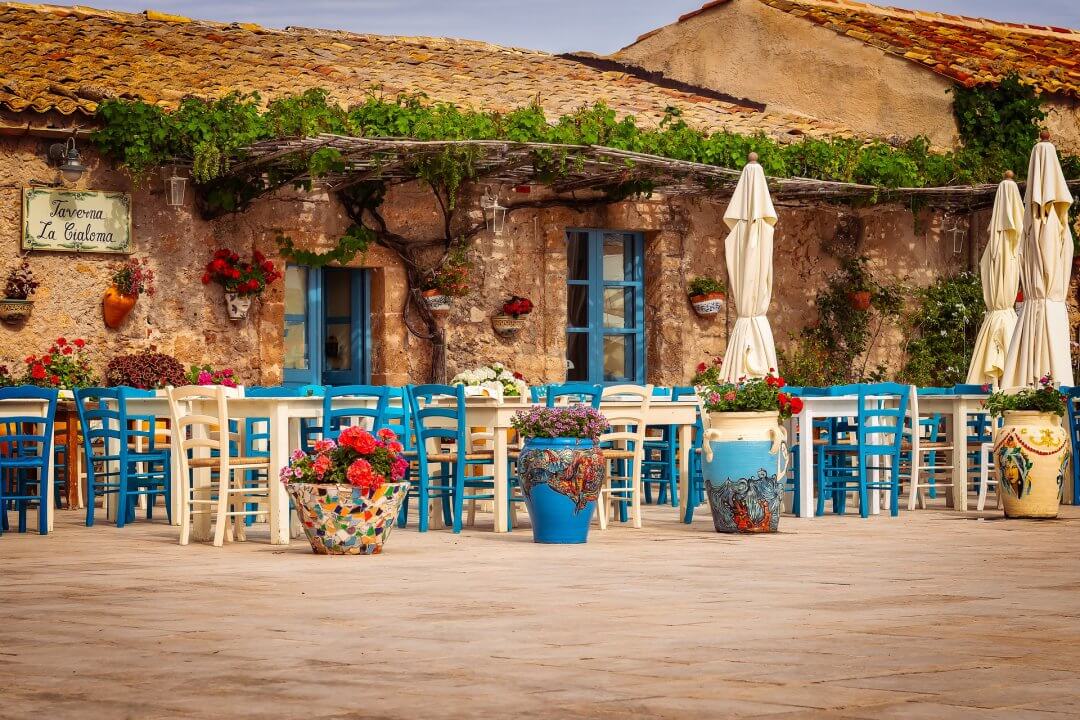 The main attraction of the day will be Noto, Baroque's masterwork and World Heritage Site since 2002.
The city will disclose itself in the full splendor of its reconstruction, happened after the devastating earthquake in 1693: from Chiesa di Santa Chiara (St. Clare Church) to the Cattedrale di San Nicola (St. Nicholas Cathedral) up to the main monuments of the old town center.
In the southernmost tip of continental Europe is the municipality of Portopalo di Capopassero, wherein you can find the ‘Isola delle correnti’ (Island of currents) – a crumb of Sicilian land bathing in distinctive waters. Right here, the Ionian and Mediterranean seas meet and merge, yielding a unique play of colours.From here, you can easily pop down to Marzamemi, an old fishing village, very well-known for its tonnara (tuna processing plant). Ambling through the village’s lanes will certainly be an unforgettable experience for any traveller. 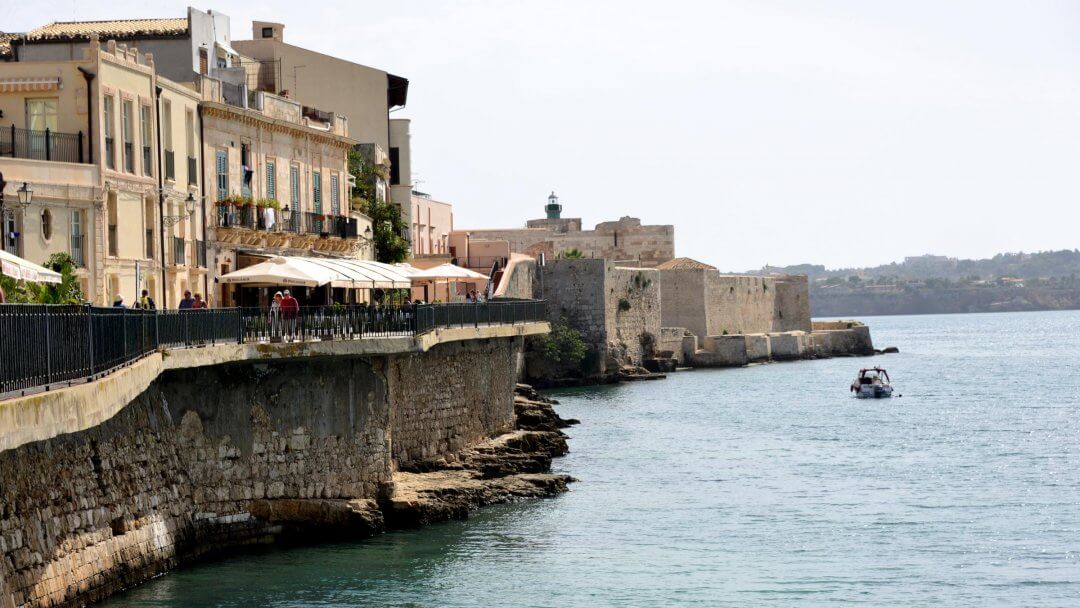 Ortygia is a small island which constitutes the historical centre of the city of Syracuse. Seeing tuna filleting happening right behind your eyes is a highlight of the Old Market of Ortygia, along with shopping for local delicacies. The Cathedral of Syracuse (Duomo di Siracusa) sits at the crossroads of two apparently distinct cultures, one rising from the Magna Graecia and the other being peculiarly Catholic. 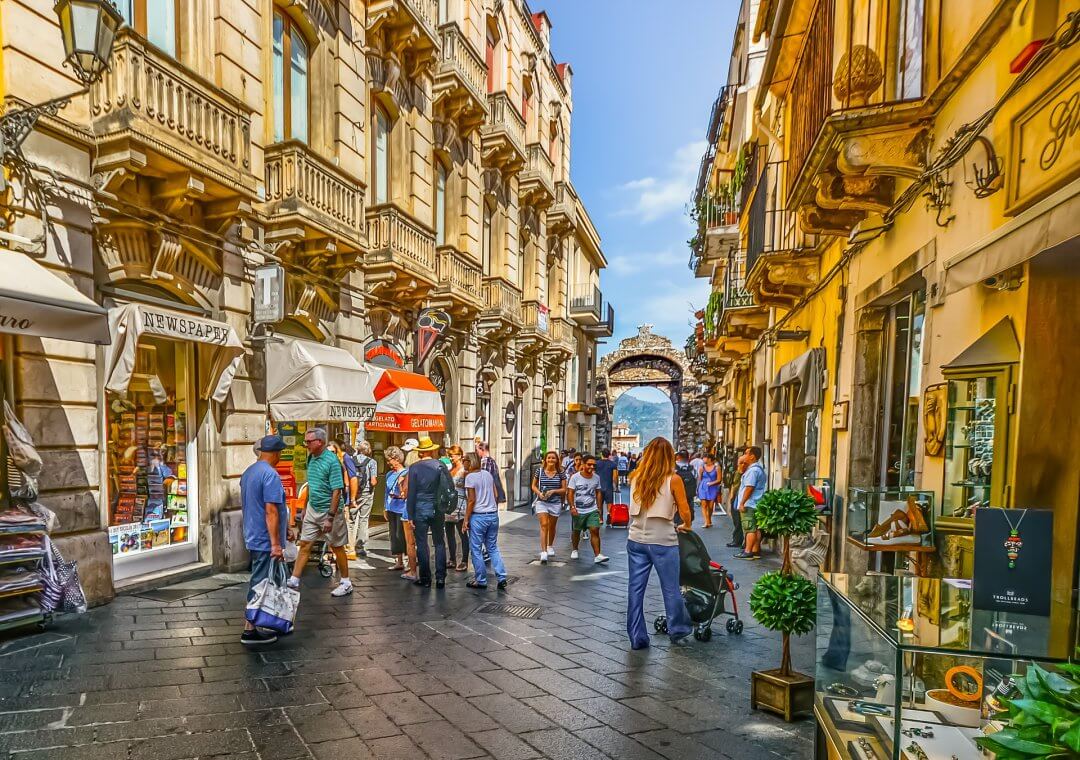 Between the blue Ionian Sea and the magnificent Mount Etna lies Taormina. Let yourself wander about its squares and streets lined with fragrant jasmines and colourful bougainvilleas, stroll along Corso Umberto and savour every luxurious sight.

This itinerary covers only a few of the attractions you could visit in Sicily in 7 days. If you would like to bring together your own customary itinerary, enquire about private tours or need any advice to discover these or other Sicilian marvels, do not hesitate to get in touch with us.

Alternatively, you can choose here the tour which best suits your needs: All Tours.